Remember my excitement back in the summer when I became a Hambassador for British pork?
It's been a really fun role already, I spent the day at Jimmy's Farm and I got to be a judge at the National sausage awards and the regional finals. The thing I was most excited about was that I would be paid in pork. When I initially pitched for the position I pledged to bring you tasty pork recipes and you might have noticed that there haven't been any yet.

That's all about to change because this massive box Red Tractor pork arrived last month and there will be regular boxes to follow. 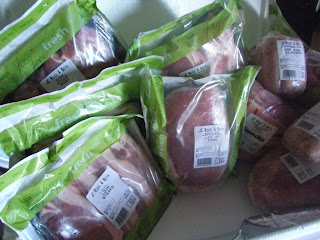 In the box there was and 2kg of pork that we used for the supper club casserole and several other delicious joints that I talked through on my YouTube channel as my part of vlogmas daily vlogging.

What would you cook first?