We were very fortunate when storm Doris hit last week, partly because the greenhouse had already blown away and there wasn't much left in the garden that could be damaged. I'd also vowed last year to get rid of the glass in the garden which meant that clearing up was much easier. 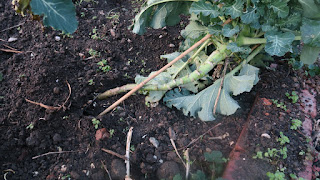 The shed door came open and the contents fell out onto the ground but anything remained intact on the ground at the foot of the shed. I'm still not sure how the wind managed to open the latch. A lot of recycling debris from the surrounding flats was being blown around and the upturned paving stones that act as a divide between us and next door seemed to catch a lot of it. Unfortunately, this was the spot that I had moved the fruit bush cuttings to just last week. They seem to be ok but I really need to get them into the ground soon. 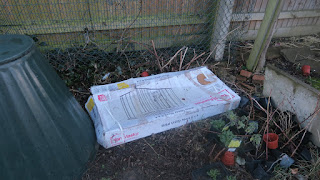 The much anticipated purple sprouting broccoli also took a real hammering. The roots remain in the ground but the plants are bent over and crooked after the winds whipped their stakes from the ground.

Wind Protection
We seem to have problems with wind damage every year. Usually it's the greenhouse that suffers and I always chalk it up to that one gale or burst of severe winds but this is happening every year and makes me think I really need to plan more for wind breakers in the garden. We live quite close to the river and this seems to add to the problem.

I've been thinking of putting dahlias into the spot where the green house used to stand but I am now questioning how they'll fair if the wind whips up around them. I'd also like to add a rosemary hedge around the garden which I'll be growing from cuttings so it'll be a long while before it fills out. I'm now planning on letting the plants fill out in a more sheltered spot before I put them into the final hedge position.
Being more aware of the wind and planning for it will hopefully mean a lot less damage this year and less time clearing up too.

Do you use wind breaks in your garden?