Last week we were invited to a supper club in an orchard hosted by some of the growers for Marks and Spencer's. It was a unique opportunity to be able to speak to the growers, one part of the Q&A that had everyone gasping was when we were told than five minutes of hail could reduce a million pounds worth of crop to just a hundred thousand pounds. 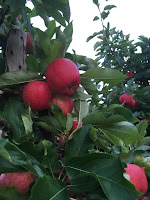 The event reminded me of a meet the growers day at a farmers market, most of the growers were second or third generation growers and their farms had been in their families for a long time. The apples are still hand picked. I hadn't imagined that would be possible for such large scale farming and thought that that it must be mechanised. Plus, the growers were charming, putting a face to them made me see the apples so differently.  Marks and Spencer's do put the growers name onto the packets of apples but shamefully I previously saw this as a marketing ploy and was sceptical that those names were of real people.

There was a lot of concern about what happened to the undersized or ugly apples. I think that Huge Fearnly Whittingstals war on waste has really helped bring this cause to the forefront of peoples minds. We were told that apples that don't make the grade go into fresh juices and other processed apples. But I did notice that there were still apples on some of the trees where the harvest had finished.

Perfect Pick
Marks and Spencer has a strict criteria for their perfect pick apples and there is a lot more chemistry behind it that I realised. As well as visual checks, a refractometer is used to measure sugars in the fruit and an iodine test used to check starches. Apples must fall within set ranges to be accepted.
Rusetting and water core are a few of the issues that can be a problem and so much of it comes down the weather. Russetting is prevalent when it has been very windy as the leaves rub against the fruit scaring it.
The perfect pick policy means that you're getting the same bite and the same quality every time you eat an M&S apple.
Marks and Spencer's also has limited edition apples that are only in store at the height of their season.
This really excited me as it's much closer to seasonal eating. I don't think we need to store apples now for the spring, if there are no apples in the spring well we'll just have to eat rhubarb instead. 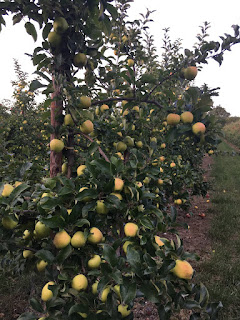 Currently there is a consumer trend towards sweeter apples, with solid colour. Everyone at the table fondly remembered a tart apple from childhood but I kept quiet as I do prefer a sweet apple.
Peter Chandler told me it's not just about sugar, acidity plays a big part too so you can't judge an apple by sugar content alone, Strawberries and gooseberries have a similar amount of sugar in them but the acidity levels in a gooseberry are much higher which is why the resulting flavour is a tart one. It's the same with apples, some varieties are more acidic than others.

What's Next?
We learned that it can take 18 months of trials before an apple is declared worthy of being scaled up for production. Fruition the collective of apple growers, work together to ensure between them they have enough apples to satisfy the demands of a supermarket launching a new variety.
Some tasty apples don't make the cut because they bruise too easily or they don't store or travel well but you could nurture them at home, a great case for growing your own.
World Wild Fruit are always on the look out for new innovative fruits and there is a variety of red fleshed apple that looks set to be heading our way in the future. 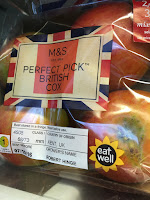 The day after our supper I took a trip to a Marks and Spencer Simply Food store to check out the apples. I found a lot of Jazz apples from one grower at the event Robert Hinge but sadly most of the other apples were imported from New Zealand. It seems at this time of year there should be no reason to import apples. I also could not find any of the limited edition apples. Marks and Spencer is making strides to support British apple growers but perhaps there is still some way to go. Since the Brexit vote there has been another trend towards reducing imports and people are looking out for British grown produce in the supermarkets so the demand is there.


Have you found British apples in the supermarket this year?