Just before Christmas I was at the BBC Good Food Show at the NEC in Birmingham. I've been wanting to go to the Good Food show for a long time, my timeline is usually filled with news of people having a great day out at the show, yet something always seems to crop up that prevents me from going but not this year.

I arrived at the National Exhibition Centre early before the doors to the show opened to the public at 9.30am. I picked up a show guide and picked out the stands that I wanted to get to early. Later in the day the crowds are really deep and it's difficult to see things properly but first thing in the morning you can waltz right up to any booth you chose and get chatting with the producers.

I was really impressed with entertainment stages too. Your ticket includes a seat in the supertheatre and at the time of booking you stipulate which show and which time you want to attend. I booked quite late and only the Hairy Bikers still had spaces available so if there is someone in particular that you want to see I would advise booking early.

I could have easily spent the day moving from one stage to another as there was so much to see. I also prebooked a ticket to the cheese monger of the year awards. At only £5 for the two hour show which included lots of sampling and alcohol matching it was very good value. However, two hours was a long time to be away from the main show, I think you really need two days to fit in seeing everything that the show has to offer. I'd use the quiter mornings to get round the stalls and producers and the busier afternoons to watch the stage entertainment.

I could also easily have done all my Christmas shopping and there was even a WHSmith stand with authors signing their books. The samples in the producers area were amazing, most of the exhibitors were really engaging and passionate about their craft and I really enjoyed chatting with them. Although I did think that there were one or two that seemed a bit bored. 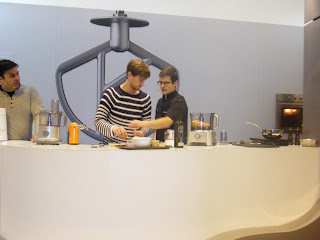 For me the highlight was meeting Ben and Mike from Sorted food, I'm a big fan of theirs and I managed to get a seat in the centre of the front row for their first demo of the day. Their recipes are so accessibly and they whipped up three speedy dishes during their short demonstration.

I vlogged at the BBC Good Food Show too