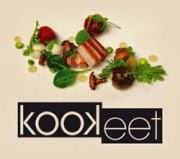 Kookeet is a food haven, a tent village housing Belgium's greatest chefs showcasing their star recipes for just €4-8 a plate.

I loved that there was no entry price, meaning you could spend as much or as little as you liked and with no ticket price I'm likely to spend much more enjoying the main attraction, the food. You bought tokens at a machine or token booth which you used to purchase the dishes from the food tents.

Kookeet ran for three days. I popped along on the Sunday evening and it was so busy you could hardly move, it was difficult to get up to the front of the tent and have a good look at the food being prepared and there were no free tables to perch on while eating. I'm not a fan of heaving crowds and I really wanted to savour the event and the food so I picked up a program and decided to come back the next day.


Monday lunchtime was much less busy, there was a fair crowd and a great atmosphere contributed to greatly by the DJ in the middle on T'Zand square, I didn't have to elbow my way through the crowds to get to the stalls either which made the whole affair much more leisurely and relaxing. I'd had time to scrutinise the beautiful photos in the program which was written in Dutch and knew which dishes I wanted to try.


I sat in on demonstration too, any anecdotal stories were lost on me and I unfortunately missed the cue to jump up and try the dish at the end as I couldn't follow a word but it was fun to watch and I could still visually follow the recipe. Stefaan Timmerman made a peeled shrimp dish with mashed potato, poached egg and a lot of clarified hazelnut butter.


I'm fairly peeved that my food photos just don't do the dishes justice, they were all stunning. The tent canopy didn't help as it created all sorts of odd shadows. I'm upset because these aren't things that I can go back and easily reshoot. I've picked out the best ones for you and with a little help from Google translate I've added the descriptions to the pictures too.

There were plenty of scallops being served and I had a beautifully fresh razor clam dish served in a razor shell with basil cream, courgettes and tomato from Lieven Vynck

The creamy dish from Hertog Jan incorporated all of my favourite flavours; cheese, potato and caramelised onion, the liberal sprinkling of truffle was certainly very welcome too. Hidden inside the cheese and potato mousse were little crispy delights of onion that brought an intense pop of flavour to the dish. It wasn't the prettiest dish of the day but it tasted so good I didn't want to eat anything else just so I could keep these flavours in my mouth for a bit longer. That has never happened to me before and is a testament to just how amazing this little dish was. I've since looked up the restaurant Hertog Jan and chef Gert De Mangeleer and found that they hold three Michelin stars.
As I generally don't have the means to afford Michelin dinning I've often wondered if all the stars hype is just a ceremonious lot of fuss. It certainly isn't in this case and I'm planning a trip to sample more of Hertog Jan's menu on our next trip to Bruges.

It was pure coincidence that I was in Belgium while this event was taking place and I may have missed it if it were not for a helpful twitter recommendation.
Next year, I'll plan a trip specifically for the event, over the three days you could sample all of the dishes available. Where else colud you get Michelin star dishes for €6? Pop it on your calendar, Kookeet is a foodie gem not to be missed.