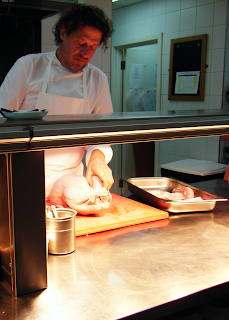 Yesterday, I attended a masterclass at Marco Pierre White's Chelsea restaurant, the theme was how to cook a perfect turkey.

Don't groan at the mention of Christmas it's less than 100 days away and in the food world that means Christmas cake is in the stores and restaurants are trotting out their Christmas menus, I pulled my first Christmas cracker of the year yesterday and now I'm all excited for Christmas, I've even got a giant gingerbread Christmas tree coming up.


Marco wants us to dissolve our fear of the stove and be confident in the kitchen, a large portion of the group were food bloggers so I don't think stove fear was much of an issue. He says people are so afraid of undercooking the turkey that they overcook it resulting in it being dry and that it's not the birds fault, it's all down to the cook. 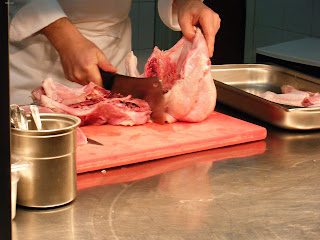 After removing the legs and setting aside the thighs, he rather aggressively diced the carcass including the legs to use in the gravy. The diced bones are baked until browned with an onion and then covered with liquid and reduced. Marco adds Bernard Matthews turkey essence to make the gravy even more turkey tasting. I couldn't find the product online but with that rich stock I'm sure you could skip it. He later finished the gravy by thickening with arrow root but also suggest a beurre maine would be just as effective. 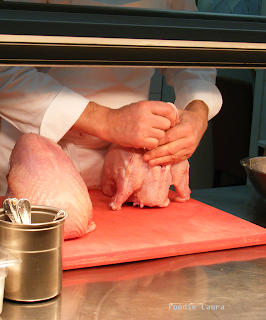 Marco cooked the crown and the thighs separately, he pulled the wish bone out of the crown to allow for easier carving and basted the crown with clarified butter. He stated no one wants the brown meat and that's why it goes into the gravy stock, in my house at least, this isn't the case and I generally have plans for those legs, all the discarded meat in this method made my toes curl, it's mainly the bones that flavour the stock so I thought it a bit unnecessary to waste so much of the beautiful dark meat which was then sieved away. You can buy a crown of turkey from your butcher and if you are using turkey essence for the gravy which just a super reduced turkey stock and adding a stock cube then you probably don't need to mess around with bones anyway. 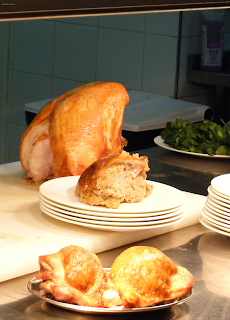 The order of the day is to demystify cooking turkey and show that Christmas day needn't be stressful so Marco is keeping it simple, very simple. My heart sank when he used a Paxo stuffing mix with added onions and sausage meat to stuff the turkey, stating "life's too short to make your own stuffing". I think I was hoping for a bit more enthusiasm about the food, homemade stuffing really isn't a labourious chore.

However,  the tangy cranberry sauce was a revelation. Marco mixed cranberries, sugar, orange juice and port together. This would make a great homemade Christmas gift too, you could add gold edible glitter stars and pop it in a cute little jar tied up with some angle hair for a sparkly Christmas gift.

We didn't cover Christmas vegetables but Marco did suggest swede purée, braised cabbage and frozen peas for simple Christmas accompaniments. If you are looking for an easy roast turkey recipe you will be on a safe bet with this one. 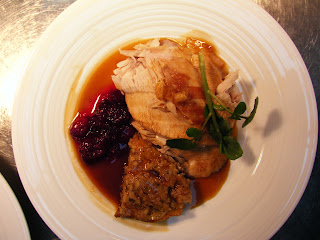 *This is a sponsored post for Lean on Turkey, all opinions are my own